Earlier this week I posted an article and an infographic called Decoding Decanting. I posted the infographic more in response to a dinner conversation I had with my friend M. while she was visiting me from NYC than as a reflection on what people should or should not do with their wine. I understood at the time that the infographic I posted wasn’t perfect but when I posted the article to my various social media channels it sparked some rather lively debate (Thanks B.) among those friends of mine who work in the retail wine sector. That being said the art of the decanters is a widely and hotly debated subject among us wine nerds: some are all for it, some support careful decision making and some prefer to leave their wine alone.

So now I’m going to take a few minutes to re-address the decanting process in a bit more detail.

1: Not all wines should be aged.

Truthfully, this will depend on the wine and the winemaker’s intention. Not all wines are meant to be slowly aged and enjoyed 5, 10, 15 or even 20 years down the road. Many of the bottles you buy at the supermarket or even your local wine shop are designed to be ready to drink. The most obvious examples being Rosé, Beaujolais Nouveau and your average bottle of Chardonnay or Two-Buck Chuck. In fact, laying these wines down to age can actually be harmful to their flavor proflie.

2: Not all wines need to be decanted.

The whole purpose behind decanting, particularly shock decanting, is to aerate (that is expose the wine to a lot of oxygen quickly) to mimic the slow cellar aging process. For some wines (see point 1 above) too much oxygen can expose flaws and allow for the dispersal of the aromatic compounds. Think about the cheap bottle you bought at the grocery store and left open on the counter for too long. After a couple of days the wine is sharp and flat at the same time. It’s hard to drink and doesn’t taste all that good. With a decanter that process would just happen a lot faster.

3: Not all decantering methods are the same. (That’s why its called an art) 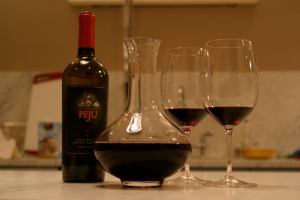 Are you decanting a young wine that needs time to allow the aromatics and the flavor profile to bloom? Then what you need to undergo is the process called shock decanting. Generally this requires quickly upending a bottle into a decanter witha wide bowl. As the bottle is upturned the wine is quickly exposed to a large amount of oxygen and the wide bowl allows for a large surface area for continued exposre. The wine can also be swirled around the decanter, much like you would swirl it around a glass.

This method is particularly popular in restuarants in the United States as it allows for the quick development of the wine.  But many winemakers and wine nerds argue that this method is abrasive and can cause shock in older vintages. They also argue that it the job of with sommelier or wine buyer to create a wine list with ready to drink wines that don’t require decanting.

Restaurants also often promote “double decanting,” which involves returning the wine to the bottle after it has been decanted. Mostly this is for presentation purposes or is the result of a lack of proper decanting vessels. The sooner they can get the decanter off your table the sooner it can be washed and used at another.

Another popular and more modern tool is the aerator. These devices typically attach to the neck of the bottle or have the wine poured through them. I will confess to owning a handheld aretor but I also admit to rarely using it. Most wine nerds argue that these devices are even more agitating that the shock decanter method.

But of course there is always a tried and true method; Open the bottle a couple hours before you want to drink/taste it, leave it on the counter and walk away until you are ready to enjoy. 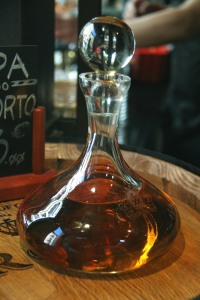 Then there is the case of decanting an old, aged wine to remove sediment? In this case you need a carafe (a decanter with a smaller neck, less surface area and in most cases some kind of stopper) and a candle. Yes a candle. Some people also like a bit of unbleached cheesecloth too.Typically the neck of the wine bottle is held over the candle flame while the wine is slowly and carefully poured into a the carafe, possible through the cheesecloth. By holding the bottle over the candle flame you can more easily see the progression of the wine in the bottle and stop pouring before the sediment leaves the bottle.

Again however this is a controversial prospect. In separating the bulk of the liquid from the sediment you leave a bit of wine in the bottom of the bottle. Who wants to waste good wine? And in addition, many winemakers fel that the sediment is a significant part of the character of the wine. In fact, they claim it’s the best part. But many people don’t like to chew their wine.

4: Don’t be afraid to ask questions

As I said before decanting is often a matter of personal choice so keeping that in mind I have one last piece of advice: Ask questions. Find a local specialty wine shop or a sommelier and start asking questions about the wine you are drinking. And start experimenting. Find what works for you.