It was the first cloudy, cool and stormy day in six weeks. Much to the city’s collective relief the heat wave seems to breaking. It also marked the end of an era as, after two years, my friend K. and I will no longer officially be residents of the same city. So a celebration was called for. And what better way to celebrate than with great wine and another milestone, my final First Growth visit: Chateau Margaux. 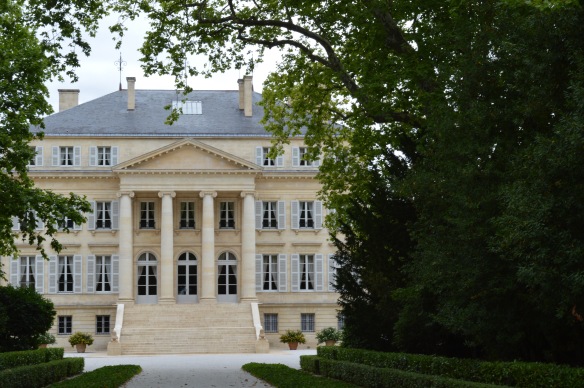 Of course we made a bit of a production out of it. Lunch at a tiny local bistro in Margaux. A fruitful visit to a local caviste. And then of course the great estate itself, with its month old new cellar. 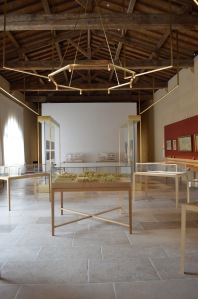 When we arrived we were surprised to see a large number of people milling about in the visitor center. Speaking from personal experience visits are always better when they are small so there was a touch of unease. But thankfully, despite the persistent inquiries of one couple, we had a private tour. Later we got confirmation that the commercial director limits the number of people allowed on the tours and will only allow one tour at a time. It can make things a bit frustrating when trying to schedule a visit but it does make for an infinitely better experience.

Now for the obligatory history lesson (it may seem boring but I firmly believe that you can’t truly appreciate a great wine until you understand it’s history): Once the home of privileged French aristocrats, the estate was once home to a 12th Century Medieval castle. It also continues to play home to the sole church in the village of Margaux. Wine production would begin the 16th Century and the estate quickly was acclaimed for the quality of its wine. However, the aristos would disappear during the French Revolution, in fact historical record is unclear as to what actually happened: flight to England or the guillotine.

But eventually the new French Republic would sell the estate. The new owners, seeking to leave their own mark on the greater Medoc area would higher famed Bordelaise architech Louis Comte and would tear down the existing Chateau. In its place a thoroughly distinctive Chateau and wine village would be constructed, complete with craftsman’s workshops and vigneron living quarters. The estate would eventually change hands five or six times before it was purchased in 1977 by André Mentzelopoulos. André invested heavily in the estate and reestablish its position as a leading producer of fine wine. Today, his daughter Corinne continues in this tradition, renovating existing facilities and now, even expanding on the estate’s existing structure with the first new above ground structure in 200 years.

Today the 650 acre estate not only plays home to 203 acres of red grape varietals and 30 acres of white grape vines but also to meadows that play home to cattle and forested areas for the local wildlife. In addition to the Grand Vin Chateau Margaux, dominated by Cabernet Sauvignon, the estate produces Pavillon Rouge and a third wine Margaux de Chateau Margaux. In addition, wines that don’t make the grade are sold off in bulk to be used in generic Bordeaux blends. The uniquely 100% Sauvignon Blanc Pavillon Blanc is one of Bordeaux’s most celebrated dry white wines.

Pavillon Rouge: Recommended for a minimum aging of 7 years, I would say this wine is rapidly reaching or has reached its peak drinking potential. The wine was clear and without sediment yet the color had already shifted to Garnet and there were slight oxidative touches. Ripe with warm cherry, oak and vanilla, the wine also had a distinctive raisin-y character.

Chateau Margaux: Recommended for a minimum of 20 years of aging, I could clearly see how with more time this wine would live up to its reputation for elegance. Ruby, but not overly deep in color, the wine delivered notes of anise, black current, black cherry, tobacco and a pronounced note of cedar. With a slightly bitter touch on the back of the palate it was nonetheless smooth and supple.

It’s not often that I criticize an estate or how they choose to present themselves to their guests, but I have to confess I was a bit taken aback by the Margaux tasting room. Not for it’s lack of presence or for its beautiful view, overlooking the newly constructed and currently being filled Library with wines dating back to 1848, but because of the lighting. Great mood lighting, the room would be perfect for hosting intimate dinners or philosophical discussions over a great glass of wine, but it was awful for trying to really analyze a wine. Yellow and dim, the lighting provided no clear sense of the wines’ color or clarity and I had to resort to using the flashlight on my phone. But nonetheless the wine was fantastic.

The visit also included a tour of the brand new (opened in early June) vat rooms and Pavillon Blanc aging cellar. With a wall that opens completely to the natural air for grape reception and small vats for greater separation of plots, what struck me most about this new building was the unique two segment vats. (Yes, I know I am a nerd.) Holding a mere 12 hectoliters (300 gallons), the lower segments of the vats are the smallest I have ever seen. Because the Sauvignon Blanc ripens a full 10+ days before the red varieties these unique vats can be used for both red and white wines; particularly as the vats are used solely for sedimentation of the whites. The newly pressed free run juice (and yes only the free run juice is utilized) is left to rest undisturbed in the vats for a few days before being placed in barrels for fermentation.

The tour also included stops by the two century old vat room containing wooden vats aging from 35 to 70 years, the vat room renovated in 2009 to include some stainless steel vats for red wine fermentation, the first and second year barrel cellars and the in-house cooperage. Like most wine producing estates things were fairly straightforward but a few details stood out. The first year barrel cellar – containing new barrels for the 2015 harvest smelled strongly of sulfur as a cellar hand was methodically using a candle and sulfur pellets to sterilize barrels. The Grand Vin is aged exclusively in 100% new oak before for up to 24 months and is racked using the traditional tool: a candle. After fermentation and an additional short period of maceration in vats the wine is placed in barrel and the final blend is determined in February. The reception of the red grapes including sorting, de-stemming and pressing, occurs in an exterior courtyard covered by a very large tent.

In addition, the estate’s careful dedication to R&D is something to be admired. Rather than hop on the latest wine making bandwagon, the winemaking team carefully monitors and experiments with tiny proportions of the harvest. For example, before implementing stainless steel vinification for the first time in 2009 the team ran tests for 10 years. Of course all of this is reflected in the consistent quality of the wine. Another great example can be found with the highly lauded optical sorters. After a two year trial run in 2011 and 2012 the estate determined that the quality was not up to par and the team returned to sorting by hand.

All in all, it was an afternoon well spent and it was an excellent milestone marker.

2 thoughts on “The Final First”