I’ve discovered: I do. When I first moved to Bordeaux and heard about Sauternes I will confess I turned up my nose. Then I had my first taste and thought ‘not quite my thing but I can understand why some people like it.” Then time passed and I got to try better and better wines. (Even a 2001 Chateau d’Yquem! Which really was something magic and a step above the others.) And eventually I discovered I really enjoyed it. Maybe my palate has just changed after a year of living in France. 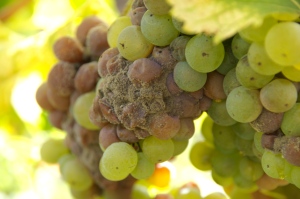 But let’s get back to the wine. Sauternes is typically made from a blend of Sauvignon Blanc, Semillion and Muscadelle grapes that have been affected by a particular type of rot: Botrytis Cincera. Botrytis requires cool, damp mornings and warm, sunny afternoons for ideal development. As the rot attacks the grapes, the skins will split open and during the warm sunny afternoons water evaporates through the openings, leaving behind a higher concentration of sugars and aromatic components.

Due to unique geographical positioning, the Sauternes appellation in Bordeaux is blessed with a high rate of Botrytis Cincera in the vineyards. Located at the meeting point of the river Ciron and the Garrone. During the late summer and early fall, as the cooler waters of the river Ciron mix with the warmer waters of the Garrone, a morning fog develops. But as the day warms and the sun rises the fog begins to clear.

Despite these ideal conditions harvest in Sauternes can be fickle and difficult. Each year harvest in Sauternes requires multiple passes through the vineyards. The best estates don’t harvest entire grape clusters but rather berry by berry, ensuring the best possible botrytis affects. But even given this careful attention, in some vintages Sauternes producers don’t produce any sweet wine at all.

But this post isn’t just about about Sauternes, it’s also about me. 😉

I recently braved renting a car and driving out to Sauternes for the portes ouverts. And yes it was a manual. My French friends joked that they would be avoiding the roads and careful watching the news. But aside from a suicidal kamikaze dog that ran in front of the care – don’t worry I didn’t actually hit it – everything went smoothly and we managed to taste at a couple of very well known Sauternes and Barsac (nearby appellation that also makes very high quality Botrytized Sweet white wines) estates including Chateau Guiraud and Chateau Doisy-Daëne. Sadly no Yquem. But then again Yquem doesn’t need to open its doors to the public to be successful or to sell its wines.

This weekend outing only further reinforced the fact that I in fact do Sauternes. But I will add a small caveat.  I would never sit down just to drink a bottle of Sauternes, rather I would sip it after a great dinner, much like I would with Port. And I am a particular fan of pairing it with Roquefort or other strong blue cheese. The bitter bite and cream of the cheese is a beautiful compliment to the smooth, sweet and slight acidic bite of the Sauternes wines.

And of course as per usual there is a photo gallery to accompany this outing. Click here to see the photos. And click here to see photos from my first visit to Sauternes.