So before the exciting details a little bit of history is in order. The Hospice de Beaune, or the Hôtel-Dieu, is an ancient charitable hospital in the heart of Beaune, considered the heart of Burgundy. Housed in an iconic 15th Century building the Hospice provided free medical services and food to the poor. Today a museum, this antique hospital was still in use during the 1980s. But the organization lives on and provides high-quality modern medical services.

The Courtyard of the Hôtel-Dieu

But what truly makes this organization unique is the wine. As the Hôtel-Dieu continued to rise in prominence it began to collect donations from prominent Burgundy citizens. Given that Burgundy is one of the greatest wine regions in France, it is not surprising that many of these donations included land grants. Over time the organization amassed a large quantity of land and created the auction to sell its wine. Local winemakers volunteer their time to vinify the many different plots and create a wide range of distinct wines. These wines are then sold by the barrel, which will produce about 300 bottles, during the auction.

Our weekend began with an early morning departure from Bordeaux and a road trip. But it was on Friday afternoon that the fun really began.  Friday afternoon we gained access to the professional tasting of the 2014 Vintage at the cellars of the Hospice de Beaune. It was these wines that would later be sold at the auction on Sunday afternoon. With over x red cuvees and x whites, the tasting was, I’ll confess, a little difficult. My palate isn’t accustomed to tasting wines still in the process of fermentation or even malolactic fermentation. That being said it was quite easy to see the amazing potential behind these great wines.

But my small group wasn’t the only car to have arrived in Beaune for the weekend, so Friday night we skipped any formal events and instead met with our classmates at a local wine bar, where we promptly drank our way through several amazing bottles.

A Little bit of wine on a Saturday night

Saturday morning came all too quickly but we rallied and went to the Burgundy tasting at the Palais de Congrès. This tasting, organized by the winemaker’s association, featured wines from every appellation in Burgundy. Mostly they were from the 2014 vintage but there were older wines as well. And of course there were warm gougeres – little cheesy poofs of goodness – to help clean the palate. 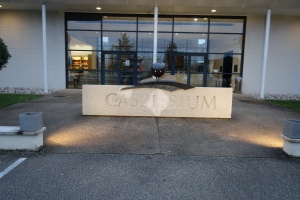 Then on Saturday afternoon we took a break from drinking all that wine (*gasp*) …. and moved on to Spirits instead with a visit to Cassissium. The home of a Creme de Cassis producer, a visit to Cassissium includes a Black Current Museum, a video screening, a production facility tour and finally a tasting. Personally, I’ve always been a big fan of currants, and black currants in particular, so the visit was a real treat. And apparently, black currents and even their leaves are quite good for you. It’s merely an excuse to eat more of them. I learned that there are five varietals of black currents, but that only one is used to make Creme de Cassis due to a lower average acidity. I also learned that the difference between a Creme and a Liqueur is the sugar content. 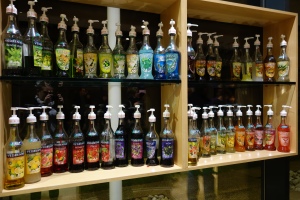 Then there was the tasting itself, which was quite fun and contained more than just a small glass of another one of Burgundy’s celebrated beverages, Creme de Cassis. We started with a small serving of SuperCassis, a particular brand that is much more highly concentrated that a typical Creme de Cassis. It was smooth, rich and flavorful. Then there were the Kirs, a traditional cocktail made from Bourgogne Aligote and Creme de Cassis. Then came a range of other Cremes including Raspberry and Apricot. And then…yes it was the tasting that went on and on… we got to enjoy a special blend of Marc de Bourgogne, a brandy-like liquor made from the stems, seeds and skins remaining from wine production, and Creme de Cassis. Almost port-like, this Marcassin was delicious and surprisingly complex. We then moved on to taste an apple liquour, other flavors of our choice, syrups and artisanal mustards, because what else would you taste at a Creme de Cassis facility. Needless to say, I was very happy when we finally left.

That evening we then got to tour, ok in all honesty it was my third tour, of the very unique cellars of Domaine Michel Lafarge. This small family run estate, belonging to the very lovely family of one of my good friends C., is located in Volnay in the Côte de Beaune. Producing excellent Pinot Noirs, crisp Chardonnays and amazing Aligote, this relatively small estate is able to produce magic in a glass. Joined by a couple additional classmates, we not only toured the cellars but got to dip into barrels and discover some of the upcoming releases from what is rapidly becoming one of my favorite French wine producers.

Old Bottles in the cellar of Domaine Michel Lafarge

Then Sunday dawned and an already fabulous weekend took a turn for the awesome. A traditional lunch consisting of foie gras, roasted chicken, cheese, champagne and of course…a little bit of wine. But not just any wine, a 1966 Corton Rouge from the Hospice de Beaune. The last vintage made by winemaker Michel Lafarge of Domaine Michel Lafarge. I wish I had the words to describe it. Smooth, round, complex, earthy, rich….I could go on, but it simply wouldn’t do the wine justice.

The handover of the infamous glasses

After that amazing lunch, we made our way into Beaune for the Vente des Vins. While we didn’t have an entree into the actual auction hall, us poor plebs were able to watch the proceedings on a large screen just outside. Despite the cold, the drizzle and the crowd we stood out in the square and watched the bidding. Things got particularly interesting during the sale of the Pièce de Présidents, a barrel set aside for another charitable cause. This year the barrel, and a pair of diamond encrusted glasses from former model Adriana Karembeu, went for 220,000 euros (basically $276,000). For 300 bottles of wine. With the taxes and all the other charges included it works out to be about 800 euros a bottle. Damn. If only. Also, the glasses thing was dumb but at least I understood it. 😀 Although due to the large international nature of the buyers and the web/phone sales the auction was in Franglais.

During the course of this awesome adventure I also got to meet and have a conversation with Allen Meadows of Burghound fame. I was completely geeking out and have now had the chance to meet two significant wine personalities within the past 6 weeks. I wonder who will be next….

And eventually we were able to make our way inside for a few minutes. Again, we got the pleb spots at the very back of the hall, but at least we got to actually see what is was like. Someday I will get to go back and try my hand at bidding. Someday.

Inside the Auction Hall

The auction itself was a resounding, record setting success. I’ve seen some contradictory numbers but I’ll stick with what was in the local paper on Monday morning. The auction brought in over 7.3 million euros in wine sales, 1.8 million for 117 barrels of white wine and 5.4 million for 417 barrels of red. In addition 4 barrels of Eaux-de-Vie de Marc de la Récolte, another brandly-like product made from wine production waste, were sold for 3.7 thousand euros and one barrel of Fine de Bourgone de la Récolte was sold for 1.9 thousand.

Sadly Monday morning we had to return to real life and student-priced wines. So we got back in the car and made our way back to Bordeaux. For the rest of the photos from my adventure, click here.

And finally, a huge thank you to the Lafarge family for their hospitality, an amazing once-in-a-lifetime weekend and for sharing their amazing wine.