May is a fun month in France. The weather has already started to turn and there are four federal holidays, which thanks to the way the calendar fell this year meant four long weekends.  And of course, being me, I tried to take advantage of all of them. There was the Saint Emilion Portes Ouvertes, a trip to London for the London Wine Fair and a girl’s weekend in San Sebastian. And of course being me – I couldn’t let the last one go without some kind of wine related adventure.

Perched only 12 miles from the French border, the charming seaside town of San Sebastian, called Donostia in the Basque language,lies in the heart of Spanish Basque country and is one of Spain’s foremost tourist destinations. Given the city culture is rich with history and amazing food (the city boasts more Michelin stars per capita than any other in the world), it is no big surprise. The city also boasts a stunning beach and warm weather perfect for enjoying it. In addition to the abundance of gourmet restaurants, the Old Town city center is home to over 300 pinxtos and tapas bars. And of course spending time in the sun and eating all that great food makes you thirsty: enter Txakoli (pronounced CHOCK-oh-lee). 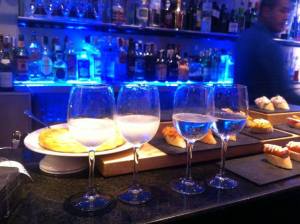 Extremely pale this slightly fizzy white wine is bracing and yet refreshing. Highly acidic the wine is crisp, fresh and easy. Typically poured in a spectacular fashion, from high about the shoulder, in the glass the wine appears almost cloudy from the continuous fine fizz. Sometimes seen labeled at Txakolina (chock-oh-LEE-nah), these wines are only produced in the North-Eastern corner of Spain but a red and rose version do exist as well. Impossible to find in other regions of Spain, the vast majority of this wine is consumed in the Basque country. However, increasingly the wine is available in the United States, most through specialist retailers and restaurants during the summer season (California readers, think the Spanish Table in Mill Valley or Berkeley).  Particularly the rose wines, as the local population is largely indifferent to the pink wines.

Uniquely suited to the salty, spicy, flavorful seafood rich Basque cuisine, virtually all Txakoli, or Txakolina, is made from the hondarrabi zuri grape, sometimes with a bit of hondarrabizuri beltza, a red variety, blended in. The carbonation is natural, a result of the careful winemaking process, which occurs in temperature controlled and sealed stainless steel tanks. It is a surprisingly modern winemaking method for a region hell-bent on preserving traditional culture. But the regions historical red and rose wine making industry was slow to recover after the Phylloxera crisis. It wasn’t until the 1960s that the local government began to encourage the regrowth of the local viticultural industry and this unique wine was born. 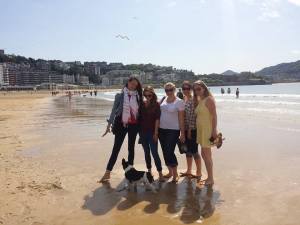 I was entirely unaware of all of this as I was heading across the border and into Spain. Visions of crisp whites, cava and sangria were dancing in my mind. But I was fortunate and was introduced to this unique wine by chance during my stay. Part of my group of friends was staying in a small pension and while we were out crawling the tapas bars we happened to run into the owner. Who promptly insisted on taking us to his local favorite for a glass. Thank god he did. After watching the traditional pour, we were finally handed a slightly fizzy glass. My first thought was “oxidation,” very quickly followed by “this must be a mistake; I have water in my glass.” But no I just had the stunningly crisp and clean Txakoli. Refreshing, light and effortlessly easy, I was so taken with the wine I resolved to do a bit more research of the tasting varietal. Sadly, I didn’t get a picture of the bottle or really have the chance to do more investigation in San Sebastien. But I guess this means it’s time for another visit.